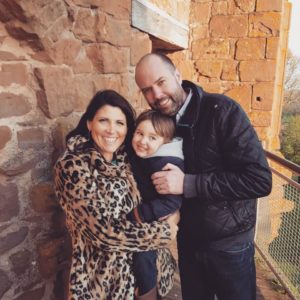 Hello! Thank you for visiting my website and taking the time to nose around too! By now, you will have established I’m a British voice over artist and actor. I live in beautiful Warwickshire with my little family.

Coming from a military family meant we travelled all over and moved regularly. Which really was very selfish of my parents considering it was not conducive to their daughter’s dream of being the world’s best and most famous actress, singer and dancer! When we finally settled in the UK I was 14 and uncompromising (and probably incredibly annoying) in my pursuit of stardom. I made it my job to write to and call casting directors and agents every single day after school. My thoroughly hard working, practical and totally non actory parents, thankfully left their strange offspring to it.  One casting director said it might be useful to have a singing demo. I called a local recording studio, went in and saw they had posters for cartoons on the wall, which is when I eagerly asked to have a go at VO. They put me forward for a BBC series called ‘The Little Vampire’ which was to be dubbed from German to English – and I got the lead girl. BOOM – how lucky was I?! And how lucky was the world to be spared my attempts at becoming a dancer (what was I THINKING?!)

26 years on I have now voiced (mainly dubbed) over 35 children’s series/films. Including the UK versions of Max and Ruby, BabyRiki and Paw Patrol and I’ve somehow continued to work in the wonderful world of animations.

The last decade has seen me venture more into the world of video game voices and I have been very lucky to have worked on games for Blizzard Entertainment and LEGO Harry Potter.

My happy places are my vocal booth and the theatre. You can find out more about my acting experience on my SPOTLIGHT PAGE. I have trained or coached with some of the best in the industry including Andrea Toyias, Tom Keegan, Donna Grillo, Mark Estdale, Peter Dickson, Nancy Wolfson, Hugh Edwards, Yvonne Morley, Marilyn Le Conte and Mel Churcher.